for a confident future

manage the changing face of life

your success is our only mission

for a confident future

manage the changing face of life

Submitted by Majerko Investment Management LLC on May 29th, 2019

Since it looks like the tariffs on China are going to be with us for a while longer, I thought it would be prudent to take a look at how this may affect GDP (gross domestic product) going forward as this is an important determinant in stock market prices. I came across the chart below that shows the projected GDP reduction from tariffs based on LPL Financial GDP growth projections. It really doesn’t look to be a big hit which confirms my thoughts as well. It is important to remember that is probably the worst-case scenario because, in my opinion, the probability of some deal with China is high.

Both countries need it for political reasons, imagine that. China exports far more to us that we do to them so they need it for their economy and their 1.4 billion people. We need it because there is an election next year and I’ll leave it at that. So, I think something will get done. In the meantime, we are going to see volatility in the market, both up and down based on developments. What should we, as investors, do? Ignore the noise and expect a better than worst-case trade scenario. 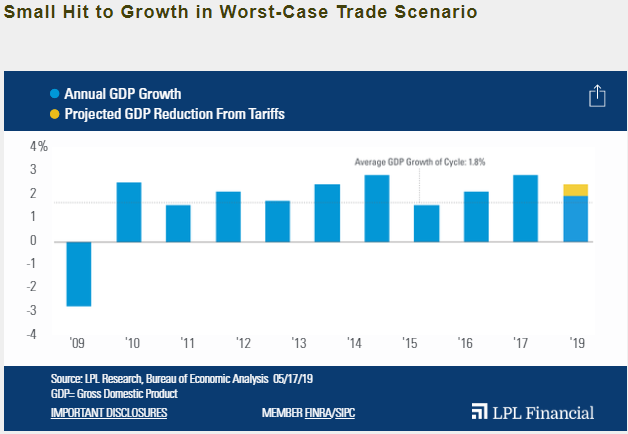 Market quotes are powered by TradingView.com